I would like to introduce to you our May Lady of the Month, Daniela Ochoa. Her story is motivating as well as inspiring. It shows how true perseverance goes a long way as well as portrays the importance of always being optimistic and looking at the bright side.

No matter the obstacles and speed bumps, you can always overcome difficulties and find your happiness. 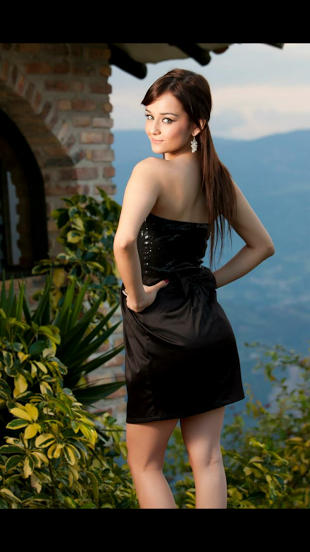 It all began in Venezuela when I was very little, my father passed away and my mother was left alone to raise siblings and I. Due to the circumstances my mother had to work three jobs and my sister Cindy Ochoa, had to start working at a young age.

My brother Cesar became my guardian, best friend, advisor, and role model. As he grew older he decided to move to Orlando, Florida for better career opportunities. After his move, I felt very alone and without someone to talk to that really understood me. For many different reasons at the time I would fight a lot with my family. At one point I decided I could not do this anymore and with the help of my aunt Marlene, I was able to move on my own. I was both going to University and working in order to maintain myself. The university was really far from where my aunt lived and sometimes it would be difficult to get back home at night at the end of classes. I decided to move with another aunt Maria Eugenia to live closer to the university. In the morning I was working as a pharmaceutical sales representative and in the afternoons I was attending classes. The schedule was very overwhelming and I had little free time.

As beautiful as my country is, there is a lot of corruption. I was always living in fear of being robbed or kidnapped. I could no longer handle this situation. Finally I made a life changing decision to move to the United States. My mother and brother were already living in Orlando, Florida, however my sister remained in Venezuela. We spent our last Christmas together in Venezuela and afterwards I moved.

Upon arriving to Miami, I was received with a warm welcome from my mother, brother, and cousin, Francia. However, I did not know what the future had in store for me. One night when I was visiting Miami with a friend, I met the man of my dreams, Luis.  Upon meeting one another we had a strong connection and decided to start a family.  I moved to Miami and immediately looked for work here. At first I worked in a restaurant, then selling swimsuits for Blue Body Brasil, afterwards a hair salon named Rosanno Ferretti.  At the same time I was working in promotions, however I am blessed to say that I was promoted to the manager position.

Luis and I have a son named Eric. He is the light of my life. I am very happy and grateful with my life and all the wonderful opportunities.

another addition to my @givenchy collection 😍🖤
So excited to be back as a model for tonight’s @sheinofficial livestream on their app and TikTok! These looks we’re sharing tonight are EVERYTHING ✨
Staying in shape is easy with my busy schedule thanks to @naturadermandcosmetics Core to Floor treatment 🔥
🐇⛈

Get SNATCHED with @taikirha x @lisa_opie
New blog post with @thebodyimageactivist today on the blog 💓 who’s loving Lindsay’s empowering af articles?😍
Today on the YouTube channel: @lisa_opie shares her @galleriaftlaud @americaneagle haul and try on💐 come get your inspo for summer 2020 ✨
Coming to the blog today: It’s Okay to Weigh More Than Your Partner 💓 @selfloveexperience_official
Loading Comments...
%d bloggers like this: